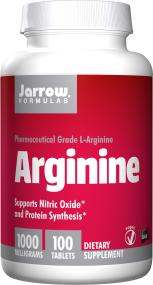 First isolated from a lupine seedling and characterized in 1886, L-arginine is one of the twenty typical a-amino acids used as building blocks for protein. As such, it is present in a wide variety of foods of both plant and animal origin with particularly high levels found in eggs, almonds, spinach, and lobster. L-arginine is considered to be conditionally essential, meaning that for most adults adequate levels of arginine can be obtained from the diet or through biosynthesis/recycling. However during growth, and at other times when positive nitrogen balance is required, such as during healing, diet, and biosynthesis, may not meet arginine needs since the rate of biosynthesis does not compensate for depletion or inadequate supply. In addition, research evaluating the effects of arginine on the structure and function of the body often utilizes serving sizes in the multi-gram range, which may be difficult to achieve with food alone.

Aside from incorporation into proteins, one of the primary functions of L-arginine is as a precursor to nitric oxide (NO). Nitric oxide synthase (NOS) generates NO from L-arginine, producing citrulline as a byproduct. The recycling of citrulline back to L-arginine is possible via the citrulline-arginine pathway, but it is an energy intensive and inefficient process that the body does not rely on for its arginine needs.

NO is a critical mediator of vascular regulation, immune activity, and endocrine function. When it comes to the cardiovascular system, this gaseous messenger has a number of effects. It is necessary for endothelium-dependent vasodilation, allowing blood vessels to relax and widen. As such, the role of NO in maintaining healthy blood pressure has been studied in depth. In addition, NO also modulates platelet aggregation and the inflammatory response.

Creatine helps to supply energy to all cells in the body, primarily muscle. However, it is not an essential nutrient because it can be produced in the body from L-arginine, glycine, and L-methionine. The first step of creatine biosynthesis is carried out by arginine:glycine amidinotransferase. Thus, the use of arginine as a precursor to creatine is part of the allure to athletes, but arginine administration has also been observed to stimulate the release of growth hormone.* The mechanism by which this could occur is unknown, but may be interwoven with the effect of arginine on creatine regulation.*

L-arginine has been found to affect levels of a number of immune modulators and cell adhesion molecules.* This coupled with effects on inflammatory balance and tissue generation make it understandable how arginine can be an important supporter of normal healing.* It appears that tissue injury, particularly of the skin, causes an increase in arginine oxidation and can deplete reserves.

*These statements have not been evaluated by the Food and Drug Administration. This product is not intended to diagnose, treat, cure, or prevent any disease.

There are no reviews yet.

Be the first to review “Jarrow L-Arginine 1000mg” Click here to cancel reply.