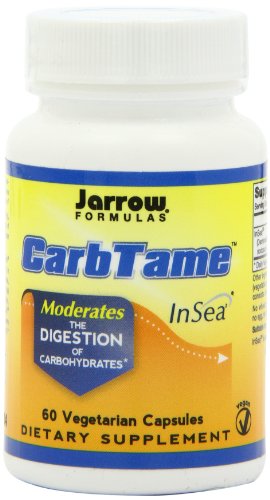 Moderates the digestion of carbohydrates
Contains insea2 brown seaweed extract
No wheat, no gluten, no soybeans, no dairy 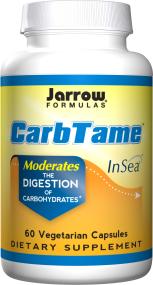 Glucose, a simple sugar or monosaccharide, is a major energy source for cells throughout the entire body and is largely produced from the breakdown of complex carbohydrates (polysaccharides) inside the intestines. Complex carbohydrates must be broken down into simple sugars in order to be absorbed within the intestinal wall and to enter the blood. With the assistance of insulin, a hormone synthesized in and secreted by the pancreas, glucose moves from the blood into cells where it fuels metabolic processes. When this process functions properly glucose levels in blood rarely exceed 140 mg/dL after a meal. Normally, a healthy balance of blood glucose and cellular glucose is maintained. However, in people with an improper glycemic response, glucose is unable to readily enter into cells. As a result, excess glucose remains in the blood with blood glucose levels reaching over 200 mg/dL (11. 1mmol/l) after a meal and fasting levels greater than 126 mg/dl (7. 0 mmol/l). Over time, elevated blood glucose levels can have negative impact on the function of the organs or the entire body.

Seaweed, a natural marine plant, has received growing research interest since the 1940s. Recent research has discovered an extract with significant impact on blood glucose levels. CarbTame (InSea2) is an optimized natural blend of demineralized polyphenols from two brown seaweed species, Ascophyllum nodosum and Fucus vesiculosus.* A. nodosum is a species of brown seaweed, in the Phaeophyceae class, found on the northeastern coast of North America and northwestern coast of Europe. F. vesiculosus (also called bladderwrack) is a brown seaweed found along the Atlantic and Pacific coasts, western Baltic coast, and North Sea coast.

Scientific research has found that extracts from both A. nodosum and F. vesiculosus inhibit carbohydrate digesting enzymes and thus modulate blood glucose levels after a meal.* In fact, specific polyphenols found in these two brown seaweed species have complementary actions on α-glucosidase and α-amylase.* As a result, CarbTame offers a dual mechanistic approach to carbohydrate digestion.* A recent clinical trial revealed a 48.3% reduction in blood sugar levels in healthy individuals that took 500 mg of InSea2 before consuming 50 g of carbohydrates in the form of white bread.* Additional clinical trials support these findings by confirming that InSea2 promotes healthy blood glucose and insulin sensitivity.* Together, scientific studies show CarbTame supports a healthy glycemic response.*

*These statements have not been evaluated by the Food and Drug Administration. This product is not intended to diagnose, treat, cure, or prevent any disease.

There are no reviews yet.